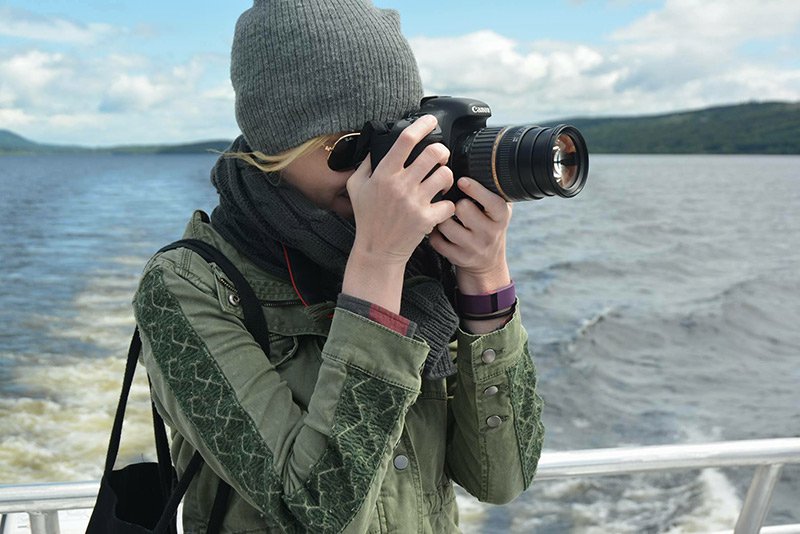 Visiting Loch Ness has long been a bucket list item for me, so when I found out I was heading to Scotland for a week, this was a must-visit location. To be out on the very waters that Nessie has been spotted in (hoax or not) was one of the biggest geek out moments I’ve ever had, and honestly, the best trip as a whole I’ve ever taken. Scotland is a magical country, and while I fell completely in love with Edinburgh, the further north I traveled in the country – the more I fell in love. From Inverness to Isle of Skye, the countryside courted my heart and ultimately stole it.

Inverness is a little over 3 hours north of Edinburgh, and from Inverness – it’s easy to hop on a tour to take you out to Scotland’s most famous loch, Loch Ness. Need some recommendations? I’ve got you covered.

Before we dive into the guide, I want to share with you guys a video I made on the trip, this was only a fraction of a trip – but one that is very near and dear to my heart! All in all, my trip to Scotland lasted 8 magical days, and as someone with Scottish heritage – this trip meant a great deal to me. My guide for 48 Hours in Edinburgh, Scotland is already up on FanBolt, and soon I’ll be doing a guide for Isle of Skye as well. However, Loch Ness was far and away the stop I geeked out at the most. Want to see exactly how much I geeked out? Take a look at the video below – and if it looks like I was about to cry tears of joy in the Loch Ness Centre gift shop – it’s because I was.

(Yes, that scene at the beginning was from 10:05pm – that’s how late it stays daylight during the summer!)

Magical no? My only complaint is that the gift shop at the Loch Ness Centre had Nessie stuffed animals that were of the wrong dinosaur… yeah – you saw that right if you’re questioning your memory. Those stuffed animals were not plesiosaurs – they were brontosauruses. But that’s my only bone to pick. 🙂

I have my full travel guide to Loch Ness below along with my personal recommendations!

Loch Ness is Scotland’s second largest loch with 22 sq miles of service area, second to only Loch Lond. However, Loch Ness has the greatest volume of water in the British Isles due to its depth at 755ft. It contains more fresh water than all the lakes in England and Wales combined, and is the largest body of water in the Great Glen which runs from Inverness to south to Fort William.

The loch is known worldwide for the legend of the Loch Ness Monster, or Nessie as many people call her/him. If you’re not familiar with the story of Nessie, she (or again potentially he) is assumed to be a plesiosaur. Plesiosaurs first appeared in the latest Triassic Period, possibly in the Rhaetian stage, about 203 million years ago. They lived in oceans all across the world until their disappearance due to the Cretaceous–Paleogene extinction event at the end of the Cretaceous Period, about 66 million years ago.

Since before the above photograph first emerged in the Daily Mail on April 21, 1934 (supposedly taken by Robert Kenneth Wilson, a London gynecologist), there have been tales of the Loch Ness Monster living in the waters at Loch Ness. Over 1,000 eye-witnessed accounts and tons of unexplained evidence have left scientists confused ever since. Despite most agreeing that the photo was an elaborate hoax – that doesn’t account for all the other sightings – the first documented sighting going back as far as 565 AD by Irish monk Saint Columba.

The legend of the Loch Ness Monster is still strong in Scotland, but aside from that legend, there is also a rich history to the remarkable region surrounding the loch. There are the dramatic Falls of Foyers on the south side of the loch (considered as one of Scotland’s top ten waterfalls) and the stunning Urquhart Castle, which was founded in the 13th century, just to name a couple.

So what’s the best way to see Loch Ness and search for Nessie? I only had half a day of my trip that I could devote to this adventure. Ideally, I’d recommend staying in Inverness for a few nights, and devoting a full 2 days to the area around the loch. There’s so much history to explore and so many destinations that shouldn’t be rushed through.

How to Get to Inverness

You have a number of options when traveling to the Highland capital. You can fly to the Inverness Airport from a number of destinations across the UK and Europe. If traveling by road from the south, the A9 is the main route, connecting the city with Perth, Edinburgh and Glasgow, and there are other great alternatives too. Whichever way you choose, it’s a pretty scenic journey! There are good coach and rail links to Inverness as well!

I stayed at a wonderful little boutique hotel in Inverness, Glenmoriston Town House, which was on the banks of the River Ness. This famed hotel is set on a tree-lined river bank terrace in the city center and only 20 minutes from Loch Ness. It’s one of Inverness’s most respected hotels, and it has an enviable reputation for service and style, with 30 stunning bedrooms, award winning brasserie restaurant, and a cocktail and whisky bar boasting over 260 malts!

What to See at Loch Ness & How to See It

While I’m a big fan of exploring on my own, I have to say that the tour options you have through Jacobite are your best bet for seeing Loch Ness. We took the Sensation Tour (£35 for Adults) – which included a 4 hour coach to Loch Ness, a cruise on the loch itself, a 1 hour visit to Urquhart Castle and a 1 hour visit to Loch Ness Centre. If you have a little more than 4 hours you can spare, I’d suggest the Passion Tour which is 6.5 hours in total you have to cruise on and explore Loch Ness, Urquhart Castle, the Loch Ness Centre and Exhibition, and the Corrimony Cairns.

The Jacobite fleet has been sailing the waters of Loch Ness since 1975, and does a truly great job at helping visitors to experience the mysteries and myths that the loch has to offer. From 60 minutes to 7 hours – they have a tour package that will fit your schedule and leave you with a big smile plastered across your face.

Departing from the Inverness Bus Station and returning at the end of the tour to the Inverness City Centre, you’ll be transported to the loch for a 30 minute cruise on the water approaching Urquhart Castle.

They do have whisky drinks available on the boat – and they inform you that you’re far more likely to see Nessie with a little bit of that whiskey in your coffee. I tried this, purely for science of course, and sadly did not see Nessie. That being said, there’s a rather epic feeling that overtakes you on that loch, and the feeling of being on the same water that Nessie has been spotted in – is pretty geek out worthy! 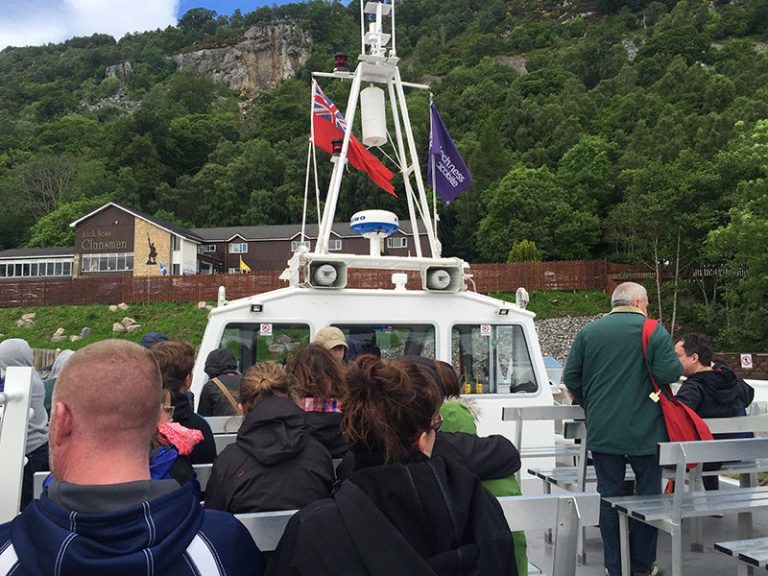 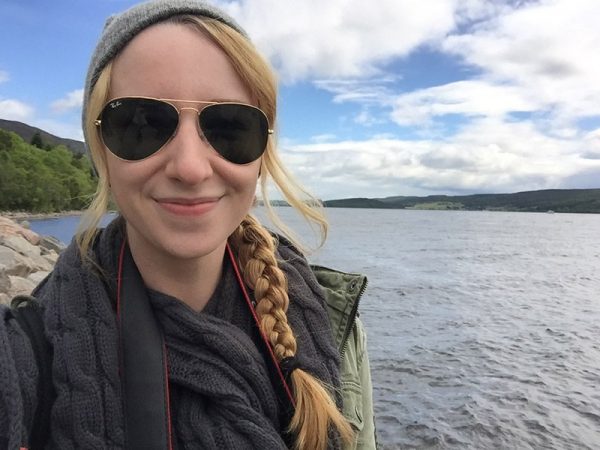 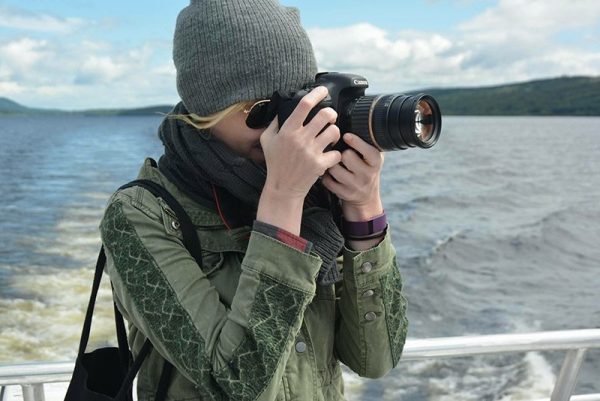 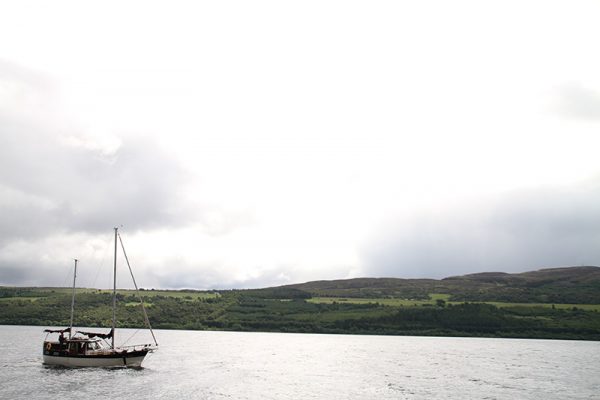 Sitting on the banks of Loch Ness, Urquhart Castle’s present day ruins date back to the 13th to the 16th centuries. Urquhart played a role in the Wars of Scottish Independence in the 14th century, and it was subsequently held as a royal castle, and was raided on several occasions by the MacDonald Earls of Ross. The castle was granted to the Clan Grant in 1509, though conflict with the MacDonalds continued. Despite a series of further raids the castle was strengthened, only to be largely abandoned by the middle of the 17th century. Urquhart was partially destroyed in 1692, and it has subsequently decayed. In the 20th century it was placed in state care and opened to the public. It is now one of the most-visited castles in Scotland as well as one of the largest in scale.

Word of advice here: the gift shop you visit at the castle doesn’t have a single Nessie souvenir in it. I’m not sure why, but never fear – there’s a much more epic gift shop awaiting you at the Loch Ness Centre. I had a brief moment of panic as you can see in the video at the bottom of this guide. 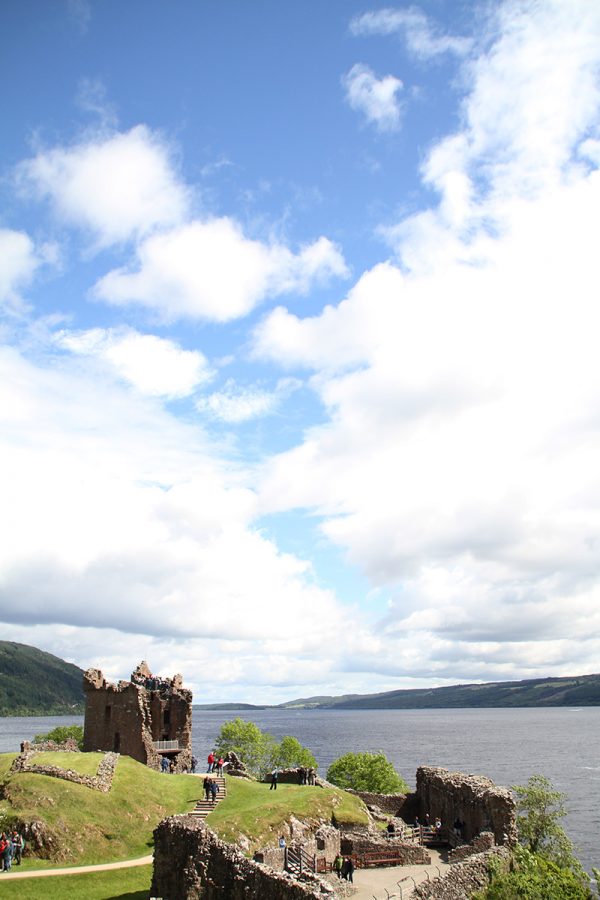 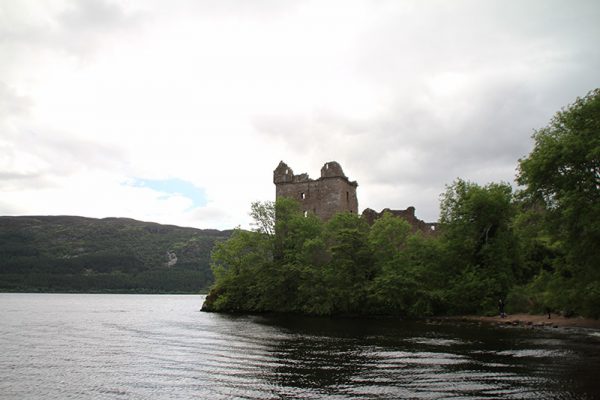 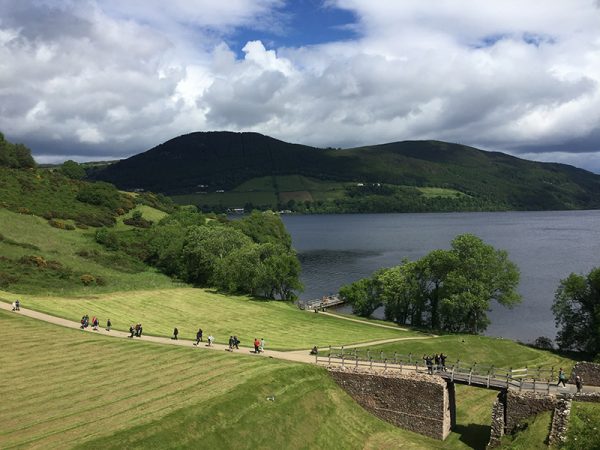 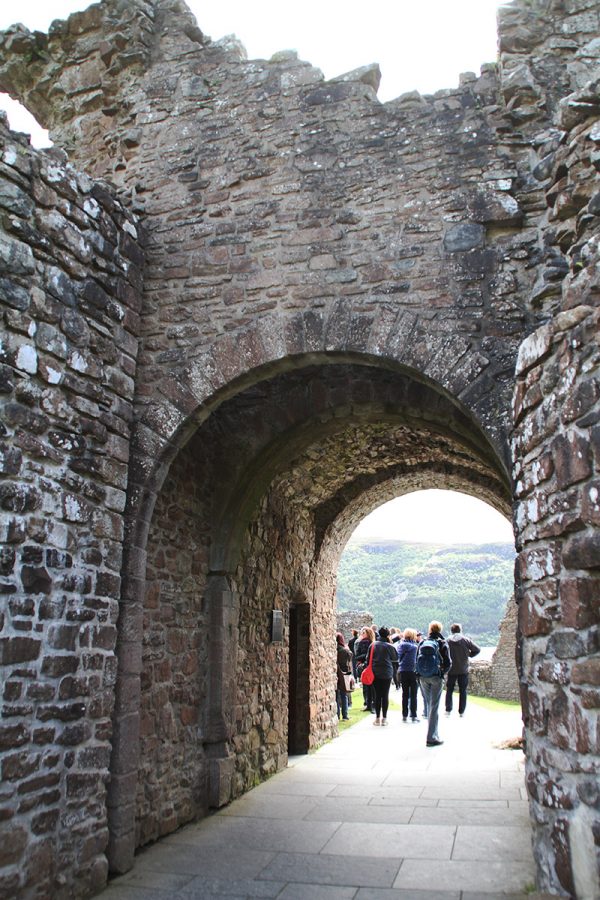 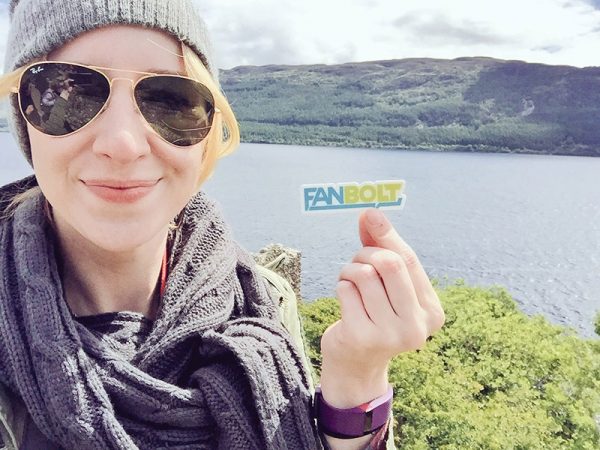 A fun fact for movie fans, Disney Pixar’s Brave has a number of backdrops that were actually inspired by real locations in Scotland, and this castle happens to be one of them that caught the attention of the creators in 2006 and 2007 when they were visiting.

Established in 1980, The Loch Ness Centre & Exhibition is the must-visit location for Nessie fans. There are 7 themed areas to explore – each one telling a different story while keeping the mystery of Nessie in the spotlight. You see real research equipment that has been used in the search for Nessie including the “Machan”, which is the world’s smallest submarine, and “The John Murray”, which is the world’s largest inflatable boat.

Walking through the centre you’ll not only hear real eyewitness accounts, you’ll also learn about what animals really could have survived the Ice Age and found themselves in Loch Ness, you’ll learn about legends that go back to Celtic times and the strange things they saw at the loch, and you’ll learn the details on how research teams have actually searched for Nessie.

At the end of this tour, you’ll find yourself in the Nessie Shop – which is the greatest gift shop any Nessie fan could ever hope to find themselves in. Don’t believe me? Watch me almost have a full-on emotional breakdown over a pair of Nessie novelty socks in the video at the bottom of this guide.

Also, there’s a pretty amazing Whisky Shop on the property as well. So if you’re looking for the perfect souvenir (aside from novelty socks – cause let’s be real, that’s always the best souvenir), then pick up a small bottle of whisky that’s shaped like Nessie in this store. They also have some additional souvenirs you can pick up that aren’t as geeky as the ones in the Nessie Shop – from shortbread, local honey, jams, and fudge to jewelry and other little knickknacks as well.

When to Go to Loch Ness

Make sure you double check on times that these tours are running and hours that the Centre is open when you’re booking your tour or visiting these locations independently. The entry into everything above was covered by my ticket with Jacobite, so again I really recommend their tour.

I was there in late June, and it was still pretty cold – dress in layers and bring a coat, because the further north you travel from Edinburgh – the colder it gets. Since it was a little cold for me in the summer, I can’t imagine the other months would be any better. June through August are probably your best bet weather-wise (and daylight will last til roughly 10pm – so you can get a little more sightseeing in), and that being said – Inverness is absolutely stunning during the summer months.

Inverness in the Summer

Scotland, thank you for one of the best memories of this Geek Girl’s life! I can’t wait to come back! 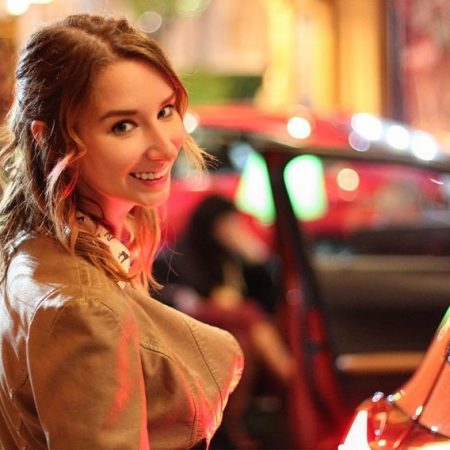 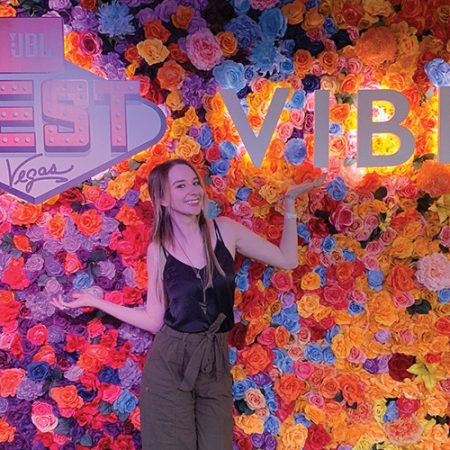 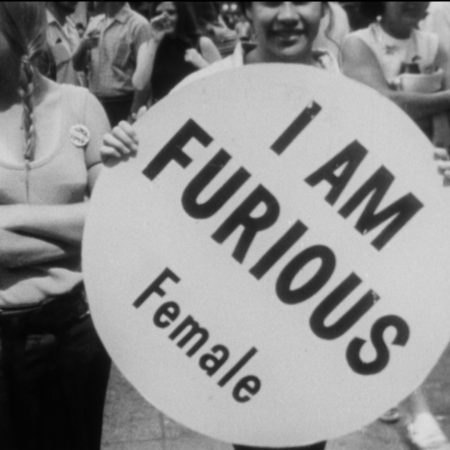 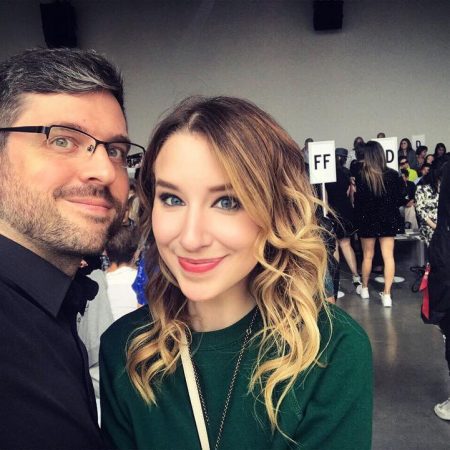